Should you be doing Prehab?

In accordance with Betteridge's Law, if the headline ends with a question mark the answer is almost always "no". However, in our case it is more nuanced than just this.

My post here is going to be a general response to things I see frequently. As with previous times when I do this I am going to use a specific example for illustrative purposes, but in no way should this be taken as an attack on that individual.

There are plenty of examples of videos describing "prehab" exercises suggested for various sports and exercisers. Prehab, short for pre-habilitation, is generally meant to be exercises undertaken by most people intended to prevent injuries and other problems that arise from training. Or to correct pre-existing, underlying problems.

One of my coaches pointed out that part of the appeal of videos and posts like these is the impression that they present an easy fix. "If I just do this one exercise then that will make up for years of bad posture or lack of strength training." etc. There are seldom easy fixes. I can't think of any in this field.


Are there specific exercises that you should be doing for that specific problem that you have? Quite possibly. But . . . 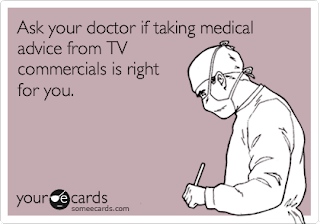 The internet is not a good place to figure this out. I get quite bothered by any blog post that aims to diagnose what's wrong with you. Diagnosing a physical problem without hands-on work and direct observation by a trained professional is usually just not doable.

Furthermore, anyone with a license in what they are doing cannot say that they diagnose a problem unless they have a corresponding clinical doctorate. Diagnosing problems without such training and licensure is usually against the law. Plus it normally violates your professional organizations standards of conduct and ethics.

And so help me the phrase, "self-diagnose". Please understand that medical professionals use people who say this as the butt of jokes because of how often they are wrong. Google University is not the same as years of education and a residency.

Don't over-estimate your knowledge in a topic.

What do I do instead?

I don't claim to diagnose people. I won't until I finish my doctorate and pass my boards. Instead I say things like, "I think you have X but I can't be sure." And then I follow it up with, "you can do A, and I feel comfortable recommending it because it might help, and it's unlikely to make things worse."

And I will only do this on a case by case basis with people that I work with regularly in-person.


One of the big problems with any pre-hab recommendation, especially one from the internet that doesn't involve an exam, is that it lacks specificity. Videos will frequently contain elements that are a "test" for a problem. But, if you get a positive result on a test for a particular problem and that test is correct 60% of the time, then it is right more often than it is wrong. But it's still wrong for plenty of people. A complete exam will use multiple overlapping tests to reach a result with a high likelihood of being positive, but that's not doable without that in-person exam and expertise.

Also, frequently, great big assumptions are being made about people. A video may suggest back exercises for everybody based on the assumption that everybody works a desk job. And has bad posture. And has done so long enough that they've suffered structural changes. Those three assumptions are progressively less obvious - the viewer, or the speaker, may not know they are making the assumption. A foam roller for your back is only pre-hab if you have structural changes leading to a fixed kyphotic spine.


Let's be honest here, a big part of my objection is basically to amateurs acting like experts.

There exists a strain of resistance to experts in our culture. The idea that people who have education, knowledge, and experience gained from other such professionals is overrated. Or out of touch with reality etc. That one's gut can provide just as accurate an understanding as years of study.

The great advances of the modern era are a result of study. Of experimentation. Of critical analysis of people's gut intuition. In athletic training, in the 50's there arose a new paradigm that included actual efficacy testing of training methods. After 60 years of published, peer-reviewed research the experts can make very clear, consistent statements about a variety of topics in this field. We can back them up with volumes of data and with the teams and athletes that have won over those who did not know about or use this research.

In my internship at Boston University the rowing coach for the freshman, lightweight (therefore weight limited) team came to us because the rowers were putting on weight. We knew this was bunk. Freshman college students don't gain weight from the gym. We all know why the really gain weight and it's on the weekends.

The peer-reviewed research clearly shows that the type of program we were running with these athletes is simply incapable of producing significant hypertrophic gains that would make them heavier. The coach's gut intuition was wrong. We used the research to prove it. This let us justify continuing with a well designed program that benefited the athletes. Hooray!

But I've seen this sort of problem even from experts. I am much more inclined to trust a video of this nature when it is highly specific. Of if it just says that this kind of exercise is part of a complete approach without saying that it addresses any specific problem.

But if an expert says something like: "[this is an exercise] you should be doing." without any kind of specification or targeting, then I get cranky.

A specific example for illustrative purposes.

The video that provoked this particular post is Bit #14 over at Valkyrie WMAA. In the video there is the common problem of the benefits or function of an exercise either being mis-categorized or overstated. In it foam rolling and lacrosse ball self-massage is set-up as being good for strength, stability and as a warm-up. Self-massage is not any of these things. Self-massage is a perfectly good thing to do but not to achieve any of those objectives.

Then some ankle exercises with a band are described as increasing strength and flexibility. The resistance only does one of these things - increase strength. There is also an error of exercise specificity. Seated resistance band exercises for the ankle are indicated in those recovering from an injury of the ankle. But it's not a practical, functional exercise. It does not use the ankle in the way that you use it in everyday life or in HEMA. Ankle strengthening should be done while standing or moving with a general population of people who are capable of participating in a HEMA class.

The second "pre-hab" video in the series on Valkyrie contains additional, common errors in the understanding of pre-hab.

This gets to a common problem with pre-hab recommendations. The assumption that everyone has this problem and needs physical therapy style exercises for it. The ankle strengthening is suggested as if everybody will need an injury recovery type of ankle exercises. That's a big, and usually incorrect, assumption. The fact that a random person has some weakness in this particular band exercise, in a single direction of movement, at whatever level of resistance is being generated, is implied to be evidence of it's need and value.

But is there an actual everyday or fencing action that the person has problems with? That's what might be an indication for such an exercise.

What Prehab would I recommend?

That's about it. Anything else needs to be specific to the person.

I invite readers to comment with specific questions about pre-hab. I'll use those questions to guide upcoming posts.


Most pre-hab videos and blog posts are either not actually pre-hab but are frequently perfectly good components of an exercise plan; or contain worse errors like "diagnosis". Highly generalized or blanket solutions are unlikely to be right for you.
Posted by Steven Hirsch at 11:10 AM